Nazi Zombies Wiki
Register
Don't have an account?
Sign In
Advertisement
in: Verruckt, Shi No Numa, Der Riese,
and 13 more

These appear in vending machines and they each are priced between 500 to 4000 points to purchase. On most maps, these would spawn in fixed locations of the maps Nacht der Untoten, Verrückt, Der Riese, Kino der Toten, "Five", Ascension, Call of the Dead, Shangri-La (except Juggernog and Speed Cola), Moon (Except Juggernog and Speed Cola), TranZit, Town, Farm, Mob of the Dead, Cell Block, Buried, Origins, Der Eisendrache, Gorod Krovi, and Revelations. On Shi No Numa, Shangri-La (Juggernog and Speed Cola), Moon (Juggernog and Speed Cola), Nuketown Zombies, Die Rise, Shadows of Evil, The Giant, and Zetsubou No Shima, they would spawn randomly along with other machines, sometimes along with the Pack-a-Punch machine. Perks can also be obtained via a Random Perk Bottle or the GobbleGum Perkaholic. When downed, players would lose all of their Perks, unless they obtained the Focusing Stone, completed Richtofen's Grand Scheme, use Tombstone Soda and kill themselves and respawn, revive themselves with Who's Who, complete the Maxis side of Mined Games, have the Tombstone persistent upgrade, or have an Aftertaste or Near Death Experience (or was revived by) GobbleGum. There are 13 Perk-a-Colas in total, however, players can only limit themselves to four Perks, unless special methods are used.

Quick Revive is a Perk introduced in the map Verrückt alongside Juggernog, Speed Cola, and Double Tap Root Beer and is available on all maps featured (except for Nacht der Untoten, Mob of the Dead, and Cell Block). This Perk has two different uses. In Co-op, it would cost 1500 points and it would revive players four times faster than normal. In Solo (not available on World at War and ZOMBIES), it costs 500 points, with three uses maximum, and it revives the player, who will be armed with a Mustang and Sally in Black Ops and Black Ops II (except Origins), a Mustang in Black Ops Zombies, a Boomhilda in Origins, a Meatwagon in Shadows of Evil, or Death and Taxes in all other Black Ops III maps, unless the player has a pistol in their inventory with ammo. Falling off the map would result in all Perks lost, but not weapons.

In Black Ops II, a Persistent Upgrade called Faster Revive mirrors the effects of the co-op version of Quick Revive.

In Origins, this Perk is available for purchase (unless all three of the Solo versions are used up in the game).

Juggernog is a Perk introduced in the map Verrückt alongside Quick Revive, Speed Cola, and Double Tap Root Beer and is available on all maps featured (except for Nacht der Untoten and Cell Block). This Perk doubles the player's health from 100% (2 or 3-hit down) to 250% (5-hit down). It costs 2500 points.

In Black Ops II, a Persistent Upgrade called 200% Health mirrors the effects of Juggernog, except it takes 4 hits to go down instead of 5.

In Revelations, a Helmet of Seigfried, Fury Head, Keeper Skull Head, and Apothicon Mask would give the player a purple Juggernog, which adds one more hit required to down the player.

Speed Cola is a Perk introduced in the map Verrückt, alongside Quick Revive, Juggernog, and Double Tap Root Beer, and is available on all of the featured maps (except for Nacht der Untoten). This Perk has two uses; the first, featured in all of the games, double the reload speed, and the second, exclusive to World at War and ZOMBIES, rebuilds Barriers twice as fast. It costs 3000 points.

Double Tap Root Beer is a Perk introduced in the map Verrückt, alongside Quick Revive, Juggernog, and Speed Cola, and is available on all of the featured maps in World at War, Call of Duty: ZOMBIES, Call of Duty: Black Ops, and Call of Duty: Black Ops Zombies (except Nacht der Untoten and Ascension). This Perk increases the rate of fire by approximately 33% overall. It costs 2000 points.

In Black Ops II and Black Ops III, this Perk is replaced with its successor, Double Tap II.

Stamin-Up is a Perk introduced in the map Ascension alongside PhD Flopper, and it's featured in all the maps after that (except Nacht der Untoten Farm Die Rise & Mob of the Dead (in The Giant, it randomly spawns with Deadshot Daiquiri after completing the Fly Trap Easter Egg). This Perk has two uses; the first increasing the sprinting speed by 7%, and the second increasing the sprinting duration by 100%. It costs 2000 points.

In Revelations, a Dire Wolf Head, Margwa Head, Helmet of the King, and Apothicon Mask would increase the sprint duration each by 25%.

In Black Ops II, a Persistent Upgrade by the same name mirrors the effects of PhD Flopper, except it doesn't protect the player from regular fall damage and overcooked grenades.

Mule Kick is a Perk introduced in the map [[Moon]] and after an update in ''Black Ops'', it is then featured in all of the maps, Die Rise, Cell Block, Buried, Origins, and all maps in ''Black Ops III'', with a cameo in Mob of the Dead. This Perk allows players to carry one extra weapon in their inventory. This costs 4000 points.

In Black Ops II, a completing the Maxis side of the "Mined Games" Easter Egg with Mule Kick would grant the player a second Mule Kick, allowing them to carry the fourth weapon.

Tombstone Soda is a Perk introduced in TranZit and Town and is only featured when playing co-op. This Perk allows players to regain their entire inventory minus the Tombstone Perk after their death via Power-Up when they respawn. Players can decide to commit suicide or wait until they bleed out for the Perk to work. This costs 2500 points.

In Die Rise and Buried, a Persistent Upgrade called the Tombstone Upgrade allows players to keep all their Perks minus one Perk (Quick Revive is always first on Solo) when they down and get revived.

In Black Ops III, a GobbleGum called Aftertaste share the same effects, except only with the Perks.

Double Tap II is a Perk introduced in TranZit, Town, and Farm and is featured in all other Black Ops II and Black Ops III maps featuring Perks. This Perk has 2 uses; the first is that it increases the rate of fire of the weapon by 33% and the second is that it doubles the bullet output per one shot in bullet weapons. This costs 2000 points.

Main article: Who's Who

Who's Who is a Perk introduced in the map Die Rise and is exclusive to that map only. This Perk spawns a doppelganger/ghost of the player after they down, arming them with an M1911, two M67 Frag Grenades, a Knife, and two Claymores if the player bought them alive. The player would also have the number of points they had when downed, and they can purchase anything, but it won't affect what the "real" player has, thus removing all of the purchased items when revived, as well as returning all of the spent points. The player would have a chance to go revive their real selves in a certain time limit or complete the round to be automatically revived, or have another player revive the downed player. This Perk can be stacked with Quick Revive on Solo, giving the player limited time before being revived. Downing in this state would result in the game-ending. Falling out of the map with this Perk would cause the player to lose only this Perk and teleport back to the Spawn Area. Successfully reviving the "real" player or getting revived by another player would result in the player retaining all of their Perks, minus the Who's Who.

Electric Cherry is a Perk introduced in the map Mob of the Dead and it's featured in Origins (via Der Wunderfizz) and all of the featured Black Ops III maps (except Shadows of Evil and The Giant) (via Der Wunderfizz) (in Zetsubou No Shima, it can be taken from a fruit). This Perk takes effect when reloading, electrocuting enemies around the player. The damage and radius depend on how much ammo and how the long the reload time on a weapon is; the more ammo used upon a weapon, the stronger and wider the effect is. This costs 2000 points.

Widow's Wine is a Perk introduced in Shadows of Evil and is featured in all other ''Black Ops III'' maps (Except The Giant) featuring Perks. This Perk has 2 uses; the first is that it creates an explosion of webs that encircle and slow down any enemies around the player, slowly damaging the enemy. The second is that it changes the player's M67 Frag Grenades to Widow's Wine Grenades, exploding like what the Perk itself does, along with any melee weapons. The player has a stock of webs, up to ten hits before running out. To replenish this, Widow's Wine Power-Ups spawn from Zombies and they add one hit to the player's inventory. The number of webs would stay even after being downed and revived, just not the Power-Ups. This costs 4000 points.

Der Wunderfizz is a feature introduced in Origins and is featured in Der Eisendrache and Gorod Krovi. This machine allows players to purchase a random Perk, with a certain limit of uses before it cycles a Teddy Bear bottle and moves to a different location, much like the Mystery Box. It costs 1500 points peruse and features the following Perks:

Amm-O-Matic is a cut Perk from World at War. This Perk was supposed to give the player a Max Ammo when purchased.

Main article: CandolierCandolier is a cut Perk from Black Ops. This Perk was supposed to extend the limit reserve ammo of any weapon.

Main article: PronaidePronaide is a cut Perk from Black Ops. This Perk was speculated to double the speed when going to prone.

Main article: TufbrewTufbrew is a cut Perk from Black Ops. This Perk was speculated to double the penetration of bullet weapons.

On certain maps, players are able to obtain more than four Perks in their game.

Perkaholics Anonymous- On Der Riese survive until round 20 without buying a perk.

Perk-a-Holic- On Shi No Numa obtain all four perks at once.

Note: On the iPod/iPhone/Ipad game version, both locations to earn the achievement is Verruckt. 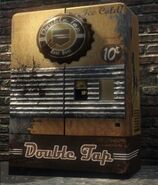 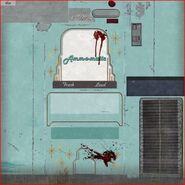